Before Rowan was born, I thought it might be nice to have an extra changing pad cover. The kind I wanted wasn’t available anymore so I decided to make one. I ordered some miky fabric and made up a pattern. I was pretty happy with how it turned out, but I ended up with some extra fabric. Not knowing what to do with it, I shoved it in my fabric box and forgot about it. 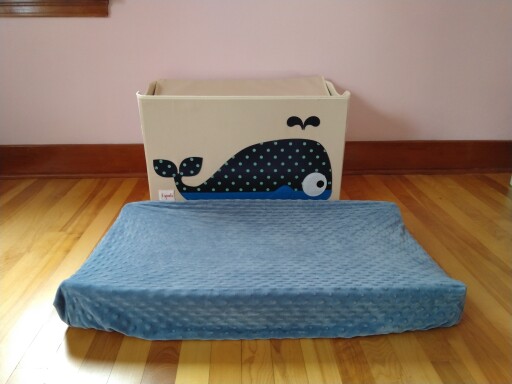 Fast forward a few months. We noticed that Rowan was slightly more likely to fall asleep on minky than any other type of fabric so I pulled out my leftover fabric and got to work. 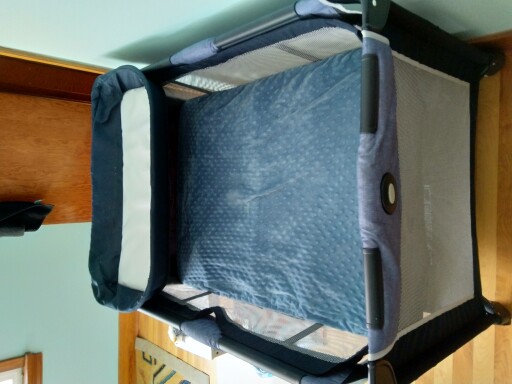 The Pack n Play cover. I really should make a second one.

But Rowan has a second crib for naps and hanging out while the rest of us eat. So more fabric was ordered and a second cover was made. I’m very happy with this one and think I’m getting the hang of it. 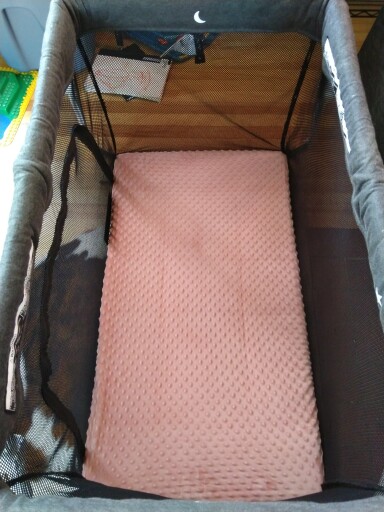 This one was fun to make! There are straps that go through the cover to hold it in place so I got to add button holes.

Next minky project: Holly has requested a quilt. It may take me a while…

Our most recent hike was a last minute find on the way to a rock shop. The weather was dicey so we decided to go for a hike at the next place that was off of the water. Thomas Cove Coastal Reserve did not disappoint!

We timed the hike beautifully with the weather and managed to luck into a easy, pretty trail. We spent most of the hike in a tidal area that would have been under water at high tide. It definitely made for a more interesting walk since we were able to see a lot more of the coastline than is possible at high tide. That being said, I think it would be interesting to see the contrast. Since we want to go back to the rock shop, we may try to time our return to Thomas Cove with high tide. 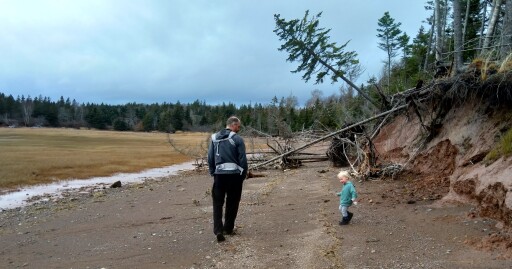 Lloyd and Holly enjoying the hike. 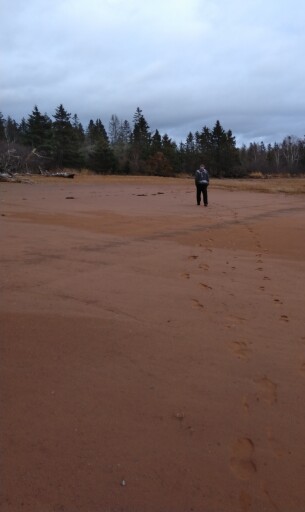 The tides here are crazy! This is all under water at high tide. 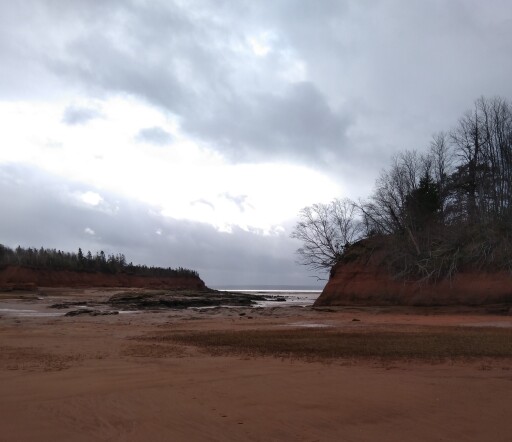 A couple of weeks ago, we decided to go to a bakery and then on a short hike. Lloyd did a bit of research to find a good bakery outside of Dartmouth/Halifax for something different and found Wellington Bakery and a nearby park that looked like to could be nice. While the bakery was disappointing, the park worked out very well. We actually had a walking toddler the whole way out, too, so added bonus!

The walk was flat and relatively easy – an important consideration with two little ones – and featured a nice woods and a pretty lake. There were a LOT of picnic tables at the lake so either it’s a very popular park in the summer or its where picnic tables go to retire. Either way, we would definitely go back to the park, but probably not the bakery. 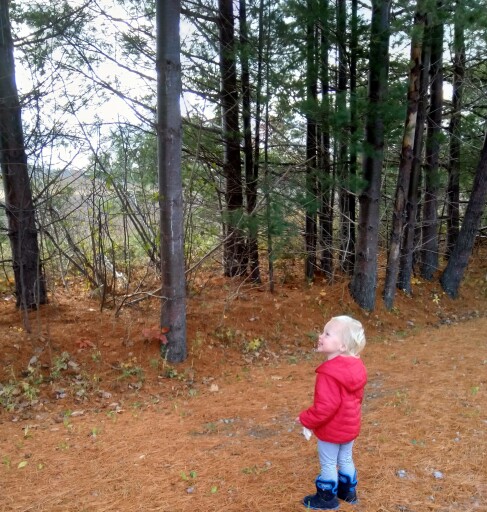 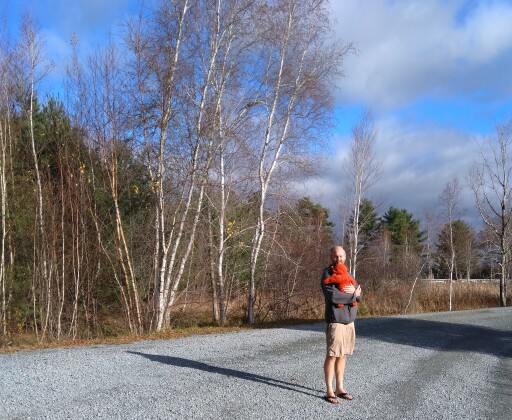 This is typical of the walk on the way out. 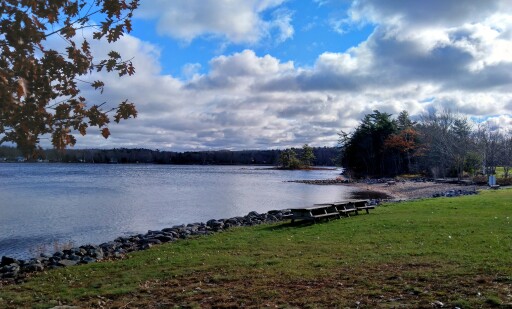 Grand Lake. We did not go swimming.

We decided to get out last weekend and go for a hike. The Norawarren Trail in Herring Cove looked like a good hike for a toddler so we thought we’d give it a shot.

Our first impression upon arrival was not positive as the trailhead started in a subdivision. However, it didn’t take long for the trail to feel remote. We saw other groups, but only a handful during the two hours we spent on the trail – so better than some actually remote hikes we’ve done in the past!

The trail was well maintained and generally easy to hike. A good portion of the hike was over rock (granite?) so the path was very solid and smooth as it was worn to bare rock. It wound through a well-treed woods and passed a good-sized pond. We stopped there due to a hungry baby and a tired toddler. The only complaint about the hike itself was that there weren’t any human entrances to the pond, just lots of dog entrances. It would have been nice to be able to stick our feet in the water after the hike out. 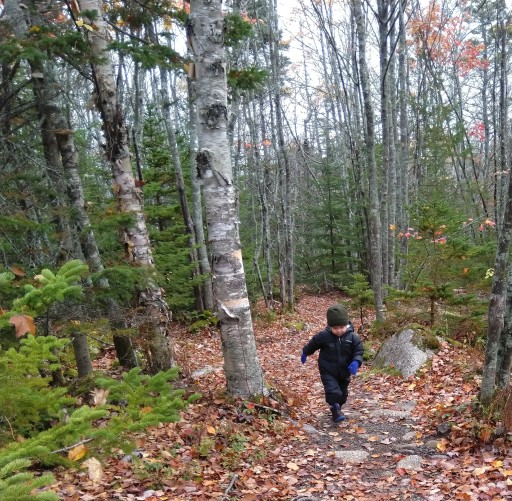 An example of the typical trail. Holly was a great hiker on the way out. 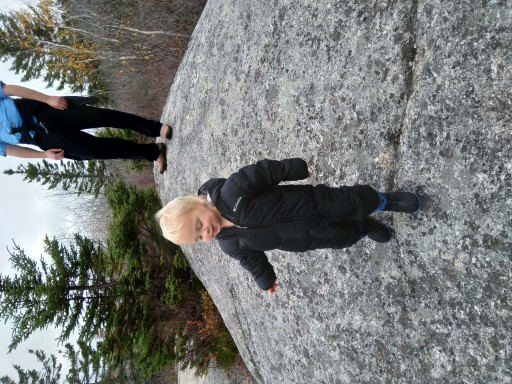 The surface on the latter half of the hike. Somebody loved it! 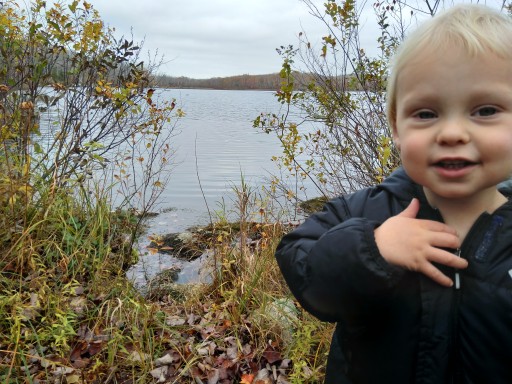 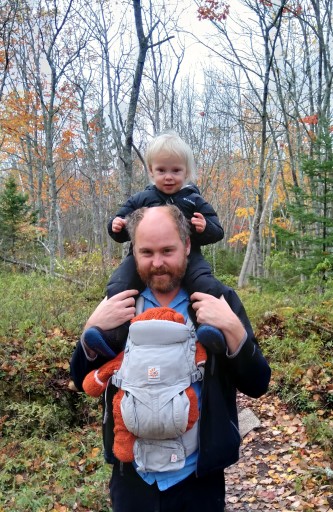 There were a couple of tired kids on the way back.

Backlog post (January 17, 2021): The holidays were a bit quiet for us this year, and as Nova Scotia was recommending against travel over the holiday’s due to Corona virus so no exciting trips :(. But last week those recommendations were lifted so we drove south along the water an took a little family hike in a small park.

Cleveland Beach is a small island – or peninsula  – depending on the tide with probably less than a kilometer of trail, but the inclement weather (wind gusts up to 60 km/hr and intermittent rain) in combination with a walking 1 year old made that kilometer count. Even though it was a short trip, it was very nice to get back out of the city again, and hopefully we can keep trips like this up for a while. 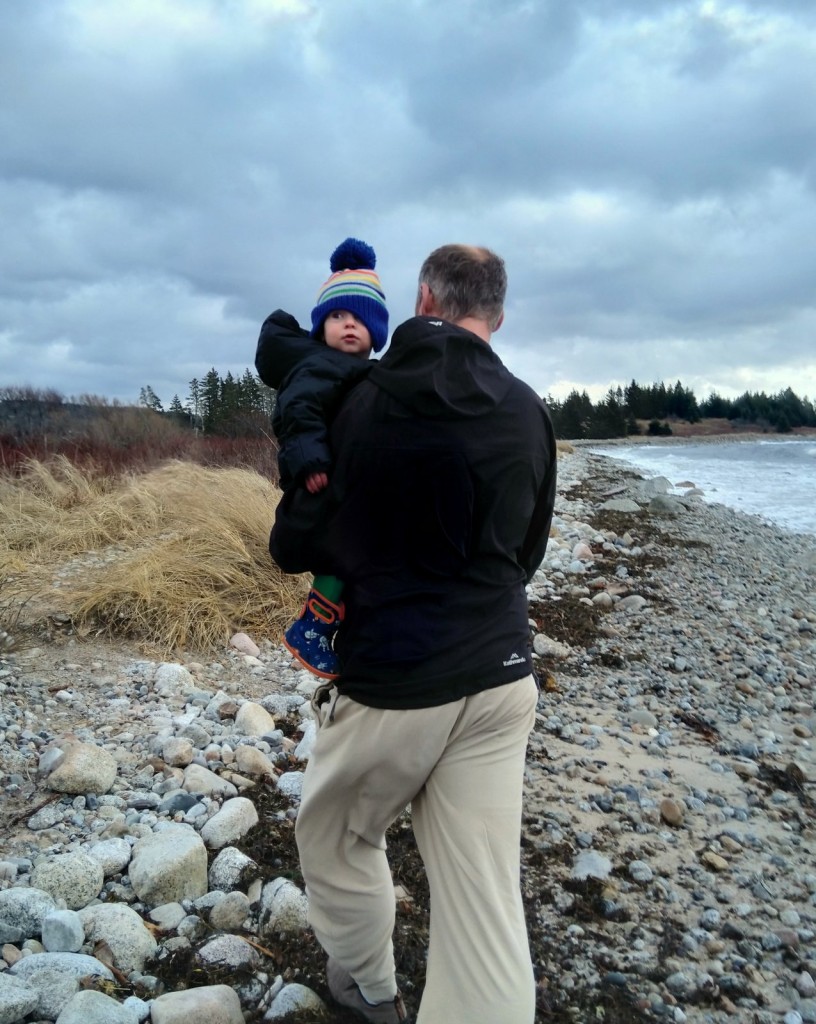 After some life events, I’m trying to get back in the habit of blogging. First up is a project I finished early in the spring: a new pair of mittens. I started these over the Christmas holidays, but forgot that a full time job and a toddler means that I don’t have a lot of knitting time. On the plus side, the mittens are good to go for this winter. 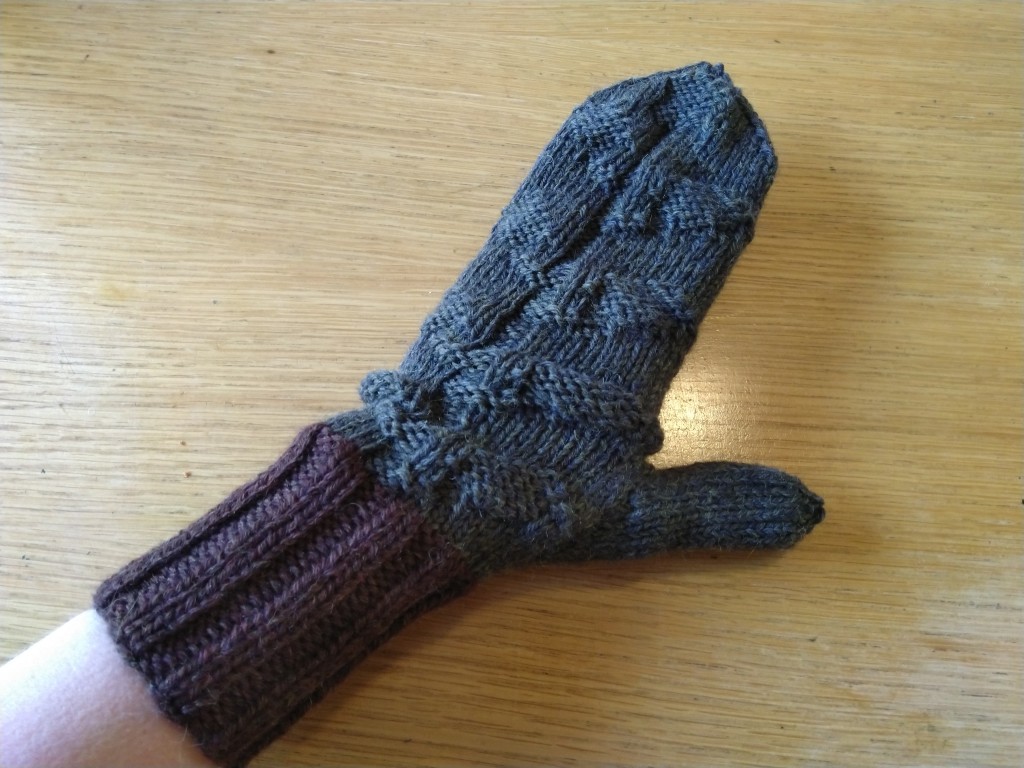 I may have been spending too much time looking at plants when I came up with this design.

On the whole, I’m quite happy with these. I designed the vine pattern to fit inside my usual mitten pattern. The result can be seen here: VineMittens. That being said, I did manage to add in an extra 10 rows due to misreading the original mitten pattern. These were left in the linked pdf because fixing this means reworking the pattern and the mittens are still functional and look nice. Future improvements…

I’m looking forward to wearing these this year. I think my hands will be much warmer! 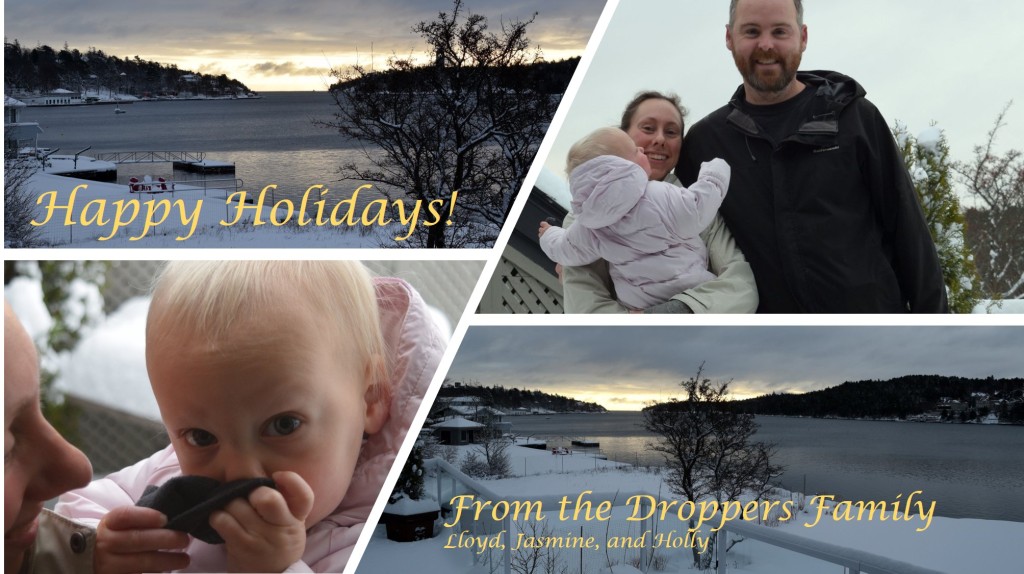 We weren’t going to let a bit of snow and wind and rain stop us from our beach adventures, so we got some coffee pastries and headed down south to another provincial park. Crystal Crescent was very nice and there was a well laid out trail that headed down to a couple sandy beaches, followed by a couple of less well maintained paths that went further south to rockier beaches.

We ended up only spending an couple of hours there as we ran out of trails that we could travel. The combination of cold wind and wet, steep, slippery rocks over the sea made us turn around with a desire to go back when the weather gets a bit more conducive to walks with a baby. 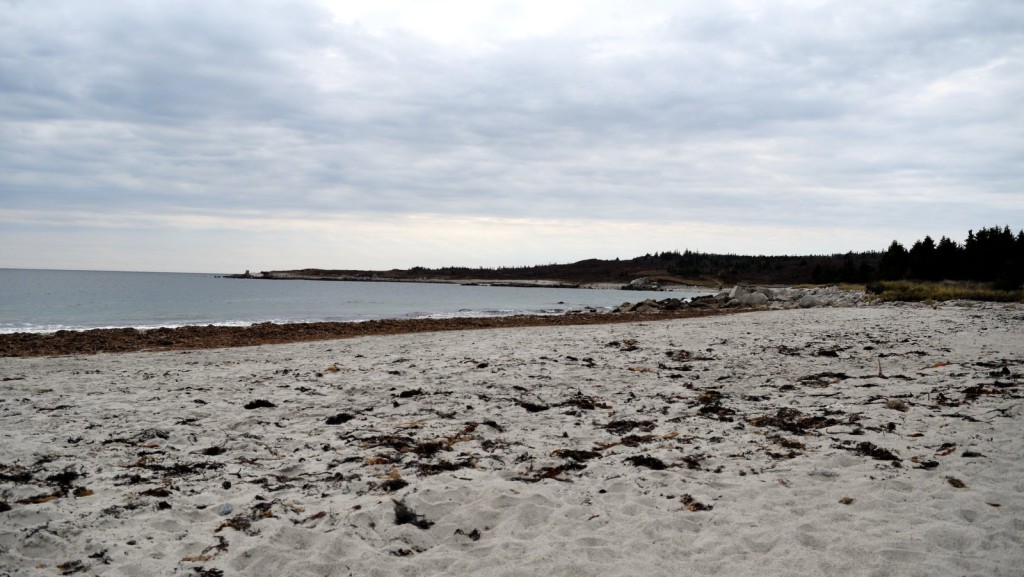 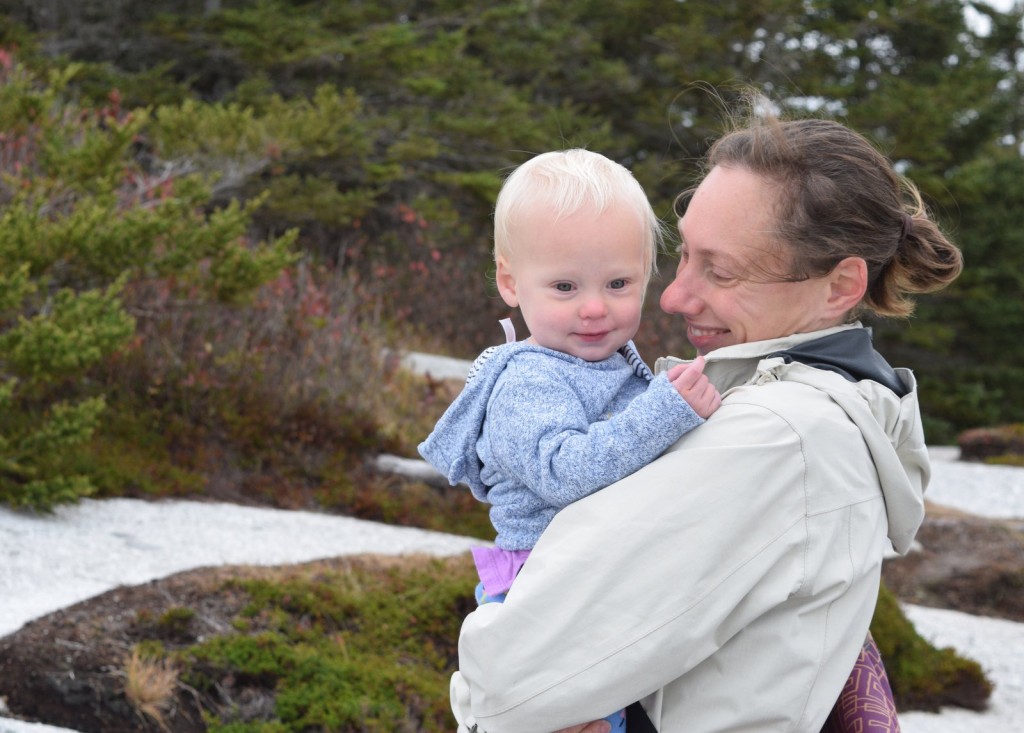 I feel like this picture belongs in a clothing magazine. 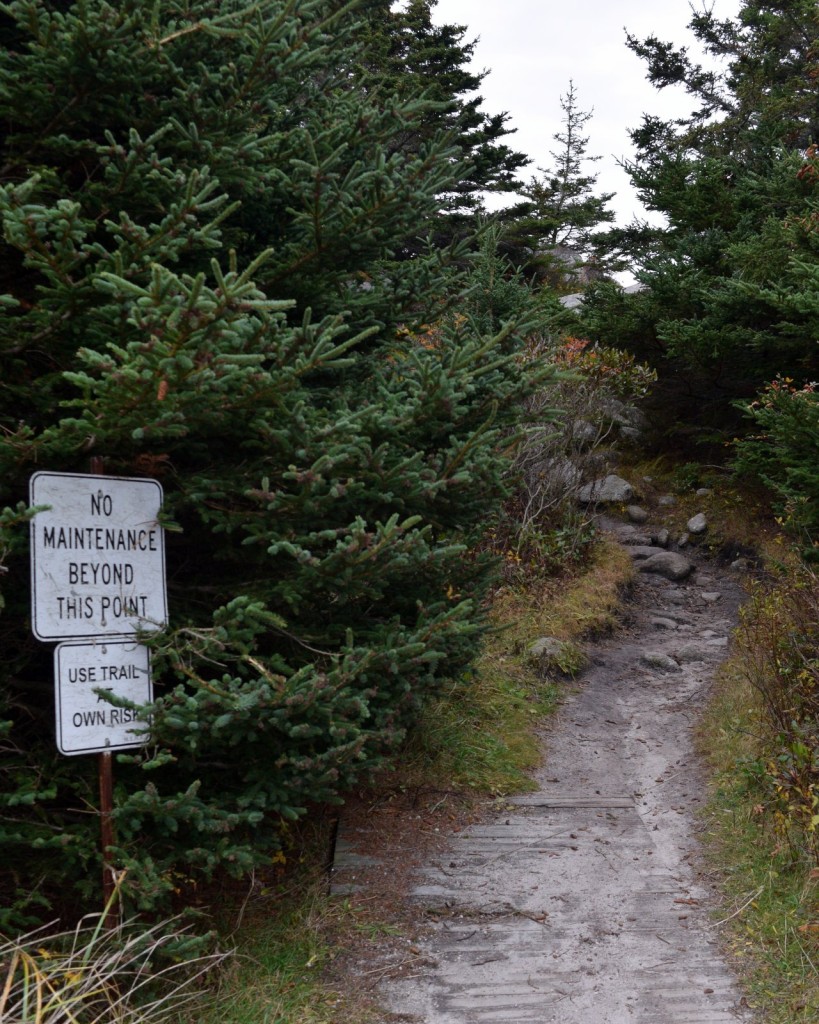 At least they are up front about the lack of maintenance. 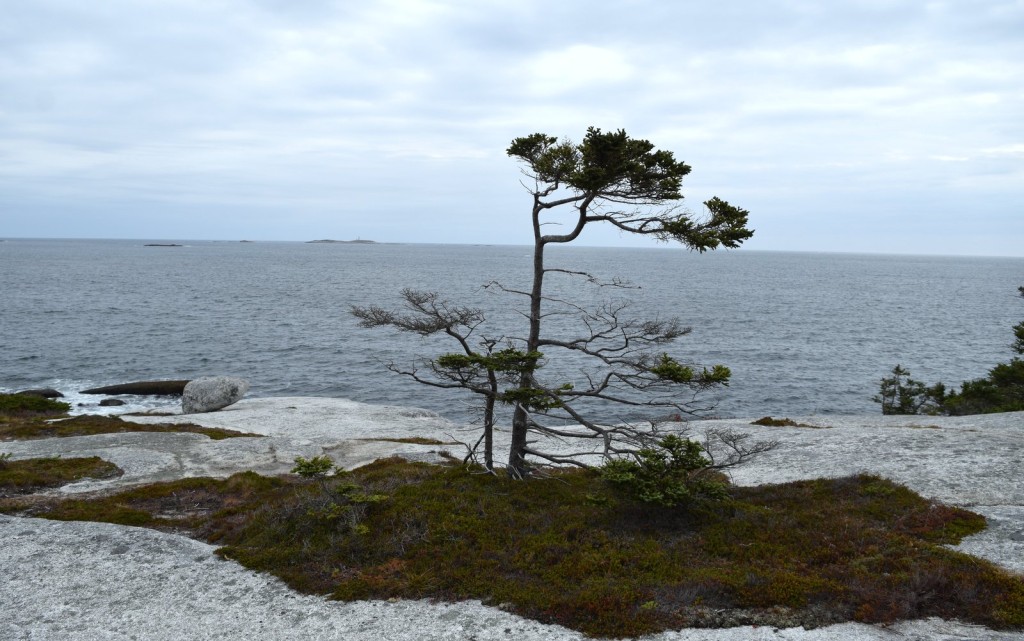 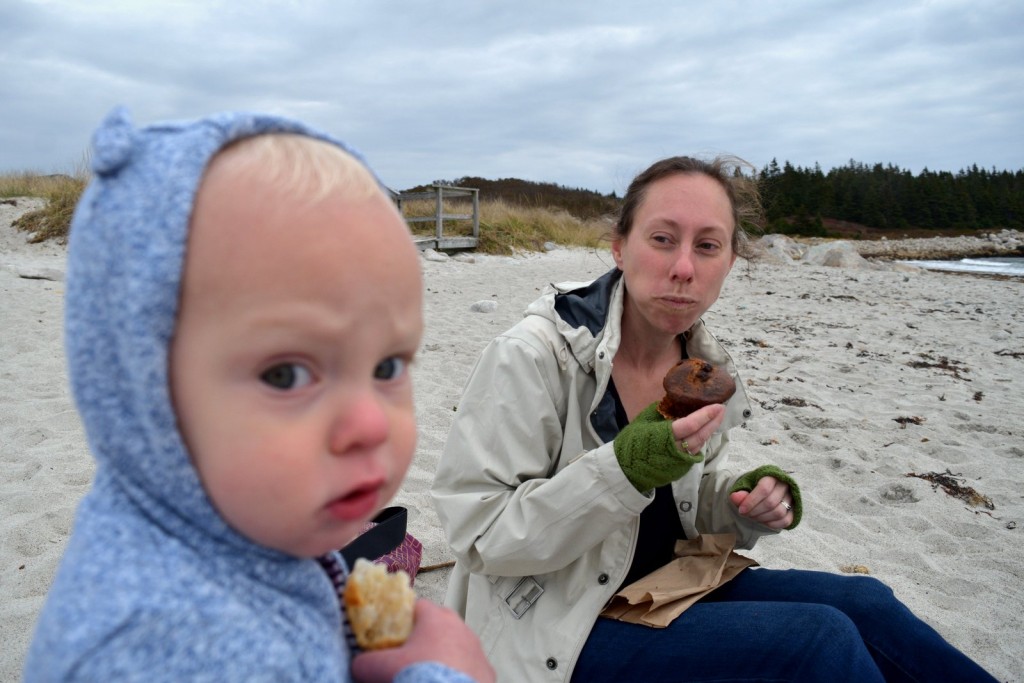 Someone is not very trusting with pastries, not saying who in the picture this applies to.

For the long weekend, we decided to go check out the beach! That is what everyone does in October, right? We made our way up north to Martinique Beach Provincial Park which is only a 45 minute drive north of Dartmouth and just hung out on the beach for the morning. It is not the first time we have taken Holly to the beach, but every time we go she can walk a little better so she gets more and more keen on exploring. Can’t wait until next summer when we can go swimming at the beach with Holly!

It was around 2 km of unbroken, sandy beach. Coming from the Seattle Puget Sound, I am jealous. 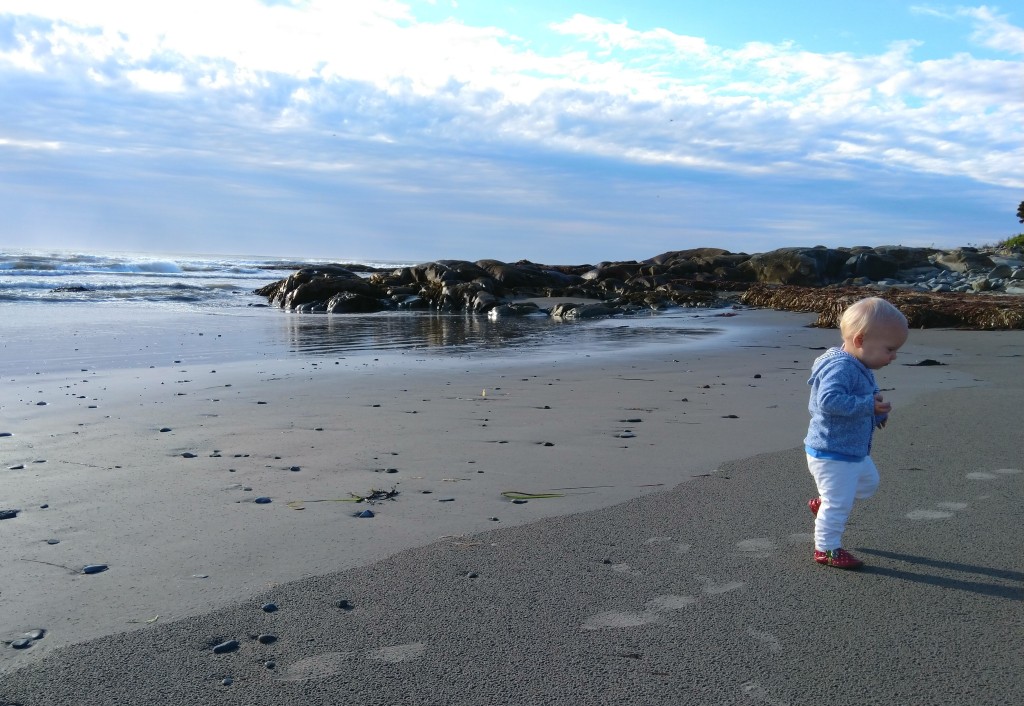 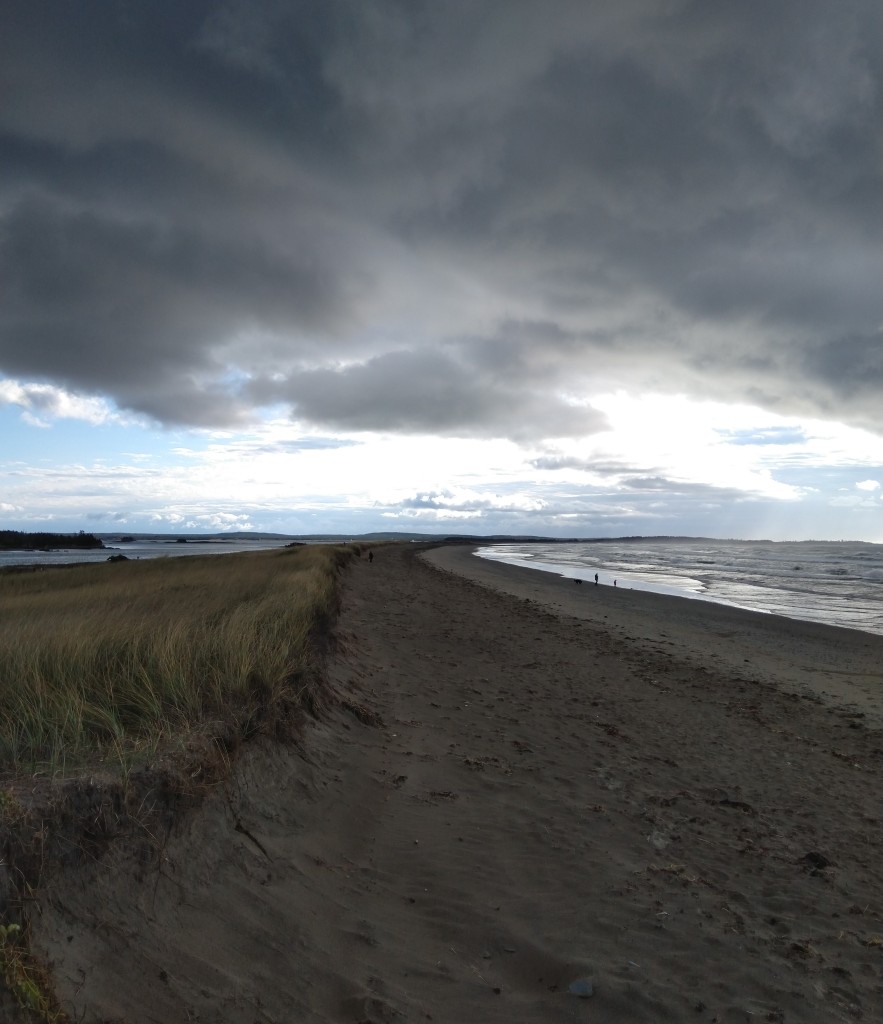 It only rained a little bit. 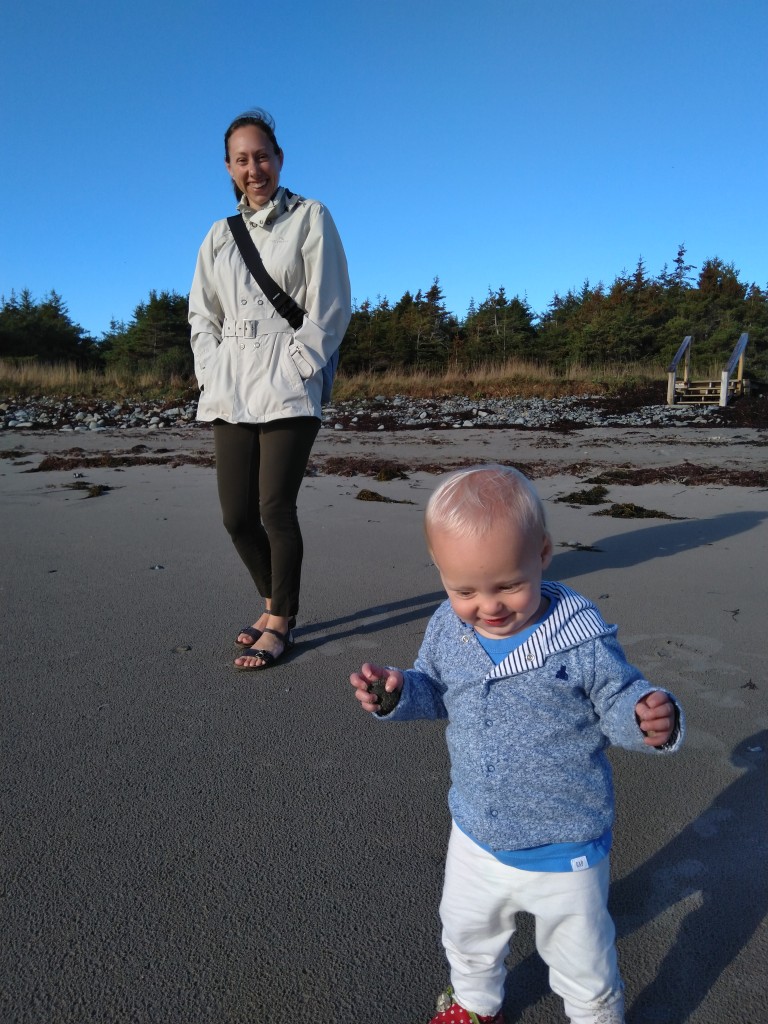 I realized in the middle of summer that it had been a while since I had done any fun projects for no purpose, which was sad. The iris that we had clipped and left on our table was also looking sad. When it dropped some purple water from the wilting flower I got and idea: I should make some ink!

After looking into it, there seemed to be a lot of varied information about how to make ink from plants, but nothing said you could make ink from iris flowers with certainty. Rather than care if it worked, I decided to use science, randomly cluggeded together info from websites, and a variety of flowers to see how it worked out. 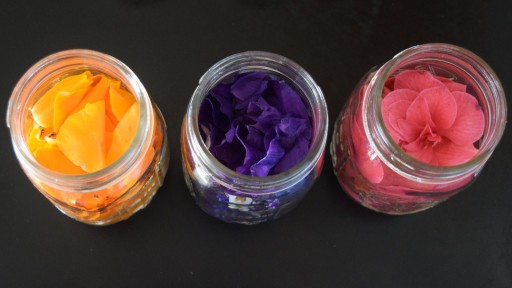 The chosen flowers, based on what was blooming in the yard. Poppy / Iris / Camilla 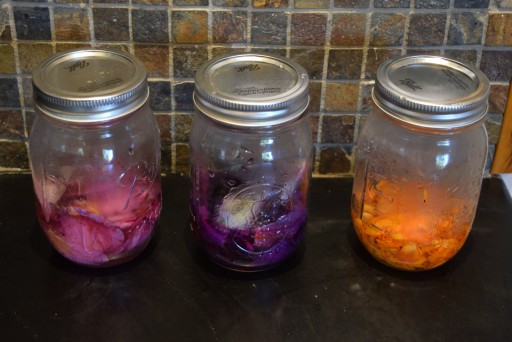 Step 1: Boil white vinegar and salt with the flowers. I put in too much salt. You really just need a pinch as you boil down the ink later. 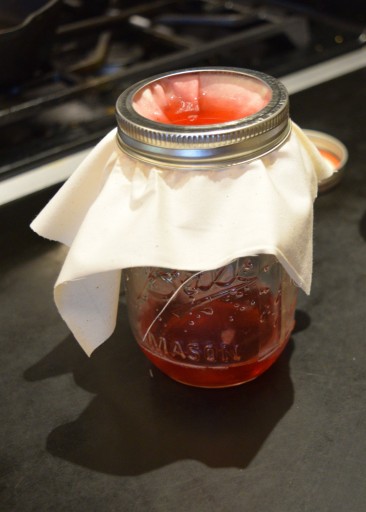 Strain (I just used leftover muslin) the petals after 30 minutes of boiling. 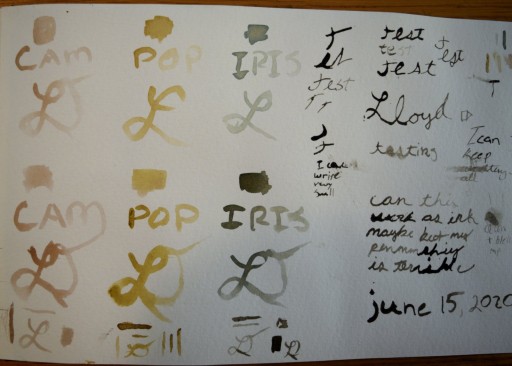 Results! The far right is iris after boiling down to the consistency of ink.

The top left shows the inks after one boiling and straining. They were much more like watercolors than inks. Middle left, I reduced the inks by half volume and they worked as paint, but were not quite ink. Bottom left, I boiled down until I got the consistency of ink and it worked! The colours were all pretty muted by the end of the boiling and the poppy was especially hard to use as the additional salt started to crystallize the ink, but this is certainly a way to make ink. 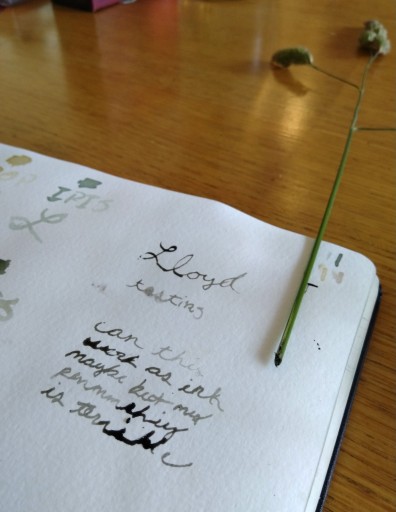 I used a piece of ornamental grass cut at the end to a sharp angle as an impromptu quill.

Overall, I would say this was a great success; I succeeded in making ink. While I just threw these out when we moved, I am certainly going to try this again next year with some measurements and a real quill!