I’ve posted on this particular project before: kitchen washcloths and hot pads. However, I thought I’d write about it anyway as the official start to craft projects in Auckland. Lloyd will also have some projects in the near future, but his projects require a bit more startup time than my projects. 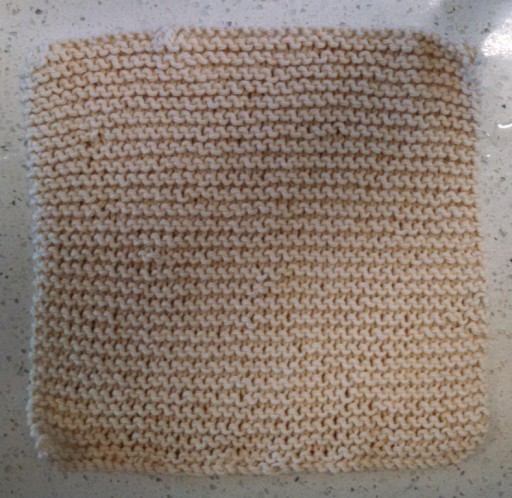 The washcloth I made. I wasn’t able to find a fun color yarn. 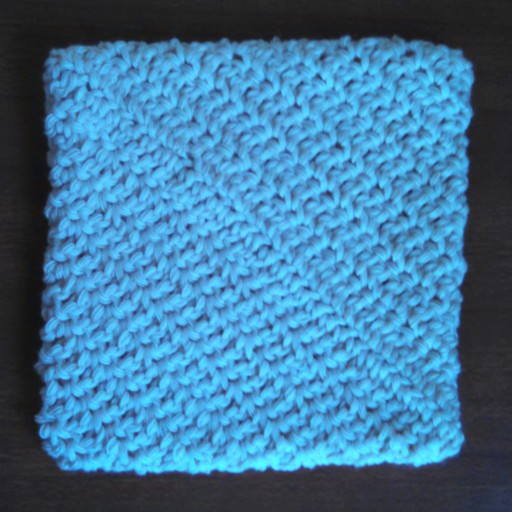 I also made three hot pads. That way, there are two to take things out of the oven with and one to put the hot pan on.

In the course of acquiring yarn for the washcloths and hot pads, I discovered that cotton is really hard to find in the Auckland area. It’s a summer knitting yarn so it was rarely stocked. The shops that had it only had very thin cotton yarn because that is what you would use to make summer garments. It appears to not be widely used for craft projects here. In the end, I had to order it online and it took about two weeks to arrive. In the future, I think I’ll just double knit and crochet with the thinner yarn. On the plus side, I did find a lot of yarn shops!

As it turns out, New Zealand is a relatively active place, geologically speaking at least. On the drive back from Lake Taupo, we stopped at a number or locations that claimed to be “Thermal Walks”. Both of the ones we went to were pretty much tourist traps, but that did not stop them from being pretty cool places anyway. However, Jasmine and I may have been spoiled by hikes on the eastern edge of the ring of fire, as California is pretty geologically active as well. But if you have not seen boiling mudholes or other exciting hot water out of the earth action before, it is worth the touristy nature. On the plus side, I got to see a geyser for the first time so that was also cool. 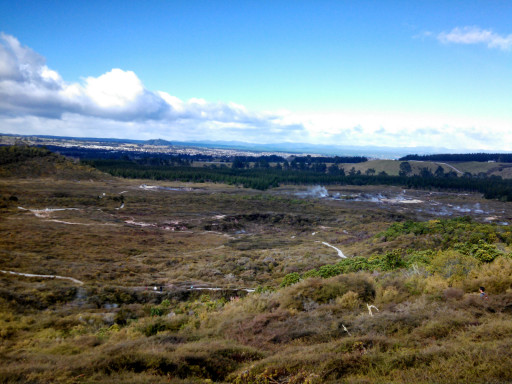 The only picture from our first stop: Craters of the Moon. Dear NZ – if you want lunar landscapes, please see the Mojave National Preserve, CA, USA. 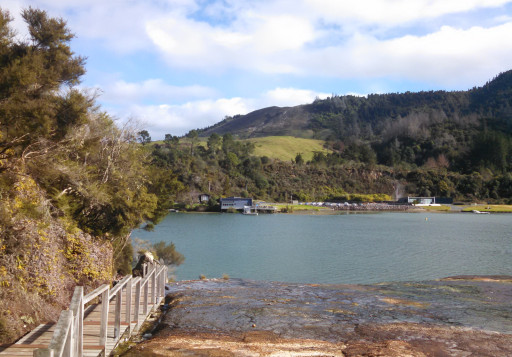 The lake at Orakei Korako. You have to take a boat across. I really wanted to just swim as it is only 150 m. Maybe in the summer. 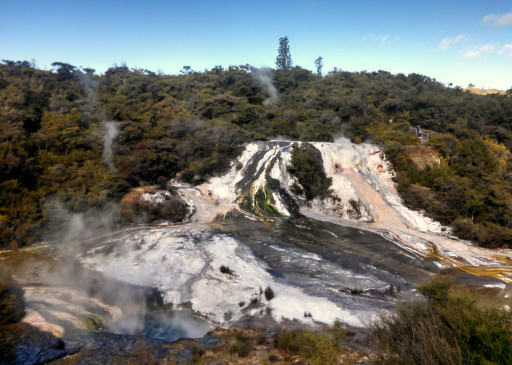 You can just see the geyser still spraying out steam on the hill side. I was too busy watching to take a picture when it erupted. 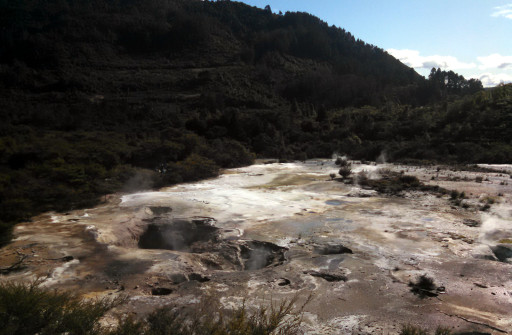 The boiling acidic water leads to some very interesting rock formations and colours. 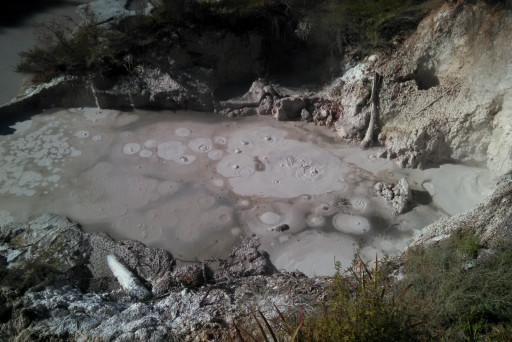 Boiling mud. It is good for the skin right? Right? 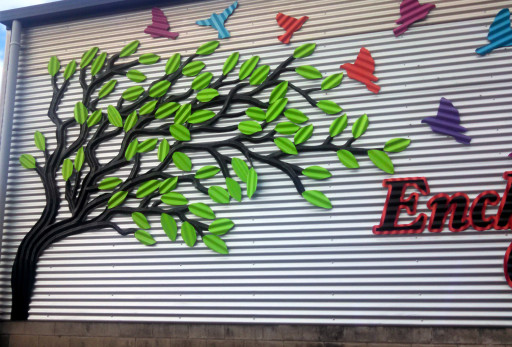 Also that sheet metal guy gets around. But I really do like the art so I want more of it.

The last post was about our hike up to Spa Thermal Park, and the next post will be about the tourist traps we hit up on the drive back from the lake, but this post is all about just Lake Taupo itself. First off, it is a pretty big lake, but, frankly, any of the great lakes in the States completely dwarf it. You can actually see across the whole lake. On the plus side, though, it is the cauldura from a 2000 year old volcano, so on that scale it is huge.

We were in a hotel right next to the lake on the north side so we got a lot of nice views from the lake and the first day we took a couple hour hike down and back a few miles. It is a very pretty view from pretty much everywhere, and while it is a bit touristy with the associated gawking cyclists; on the plus side, there are also some really nice cafes right on the lake, so its not all bad. I think I liked the lake a fair bit and we would probably go back again if we were showing people around the island – or if they were keen trout anglers.

Lake Taupo from the north. Jasmine takes a nicer panorama than I do. 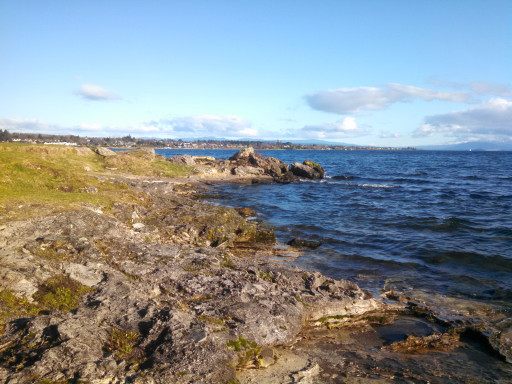 The lake is picturesque, especially with the clear winter skies. 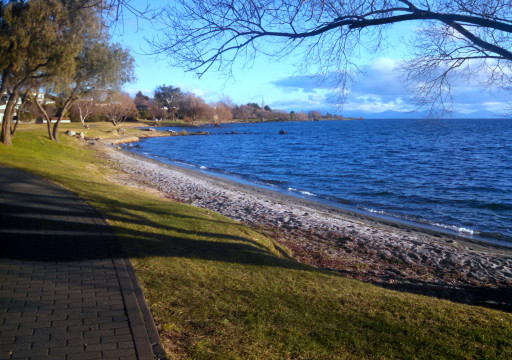 I think this is going to by my next painting attempt. 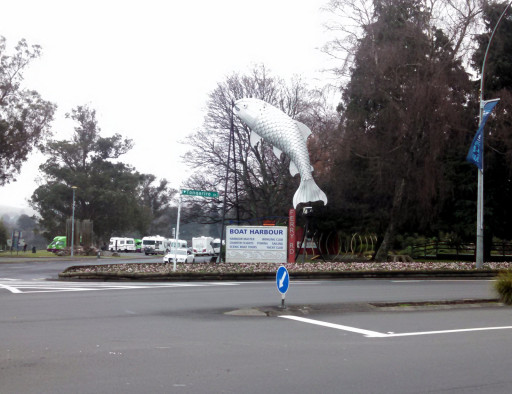 If people in the Taupo area like anything, it is trout and fancy sheet metal. This is not a joke.

Jasmine and I grabbed a rental car for the weekend and drove down to Lake Taupo. It is a bit of a tourist hot spot in the North Island, but it is very pretty nevertheless. I’m just happy to get out of Auckland, because rather embarrassingly I hadn’t got out of Auckland since we moved here 3 months ago.

We’ll do a more general Lake Taupo post next time, but today we will focus on the Spa Thermal Park just north of Taupo itself. There is a nice trail that took us up a scenic creek and into a park with a really cool hot spring that was feeding into the river. It was cold and raining so we lounged around in the pools for an hour or two by ourselves which was awesome. I imagine that on a nice day in the tourist season it is a slightly different feel.

Then we kept on hiking up to the Huka Falls, which is pretty cool but a bit more of a rapid than a falls. Also, it is the most visited natural tourist attraction in NZ which is crazy because it is nice but not really nicer than random waterfalls we saw around the Waitakere.  Also there were not many people at the falls. This may also be because it was 5 C and pouring rain … and with some hail … and also a “fresh” wind. This may be why there were not many people.

On the way back home we got soaking wet and really cold and we were excited to take a warm shower back at the hotel. 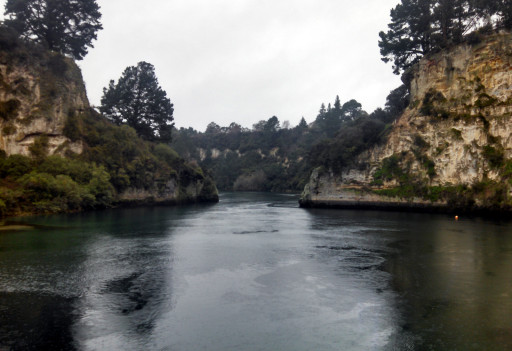 Waikato river. It has some pretty cliffs. 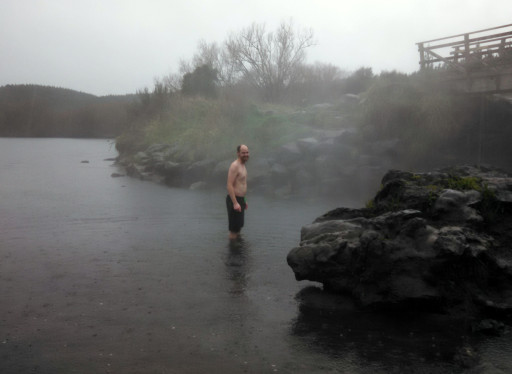 Lloyd halfway into the hot springs. Pictures obviously stopped due to the wet.

One of the hot pools. I think it is rather obvious why we just chilled here for a while. Also blurry pictures due to the sulfurous fog. 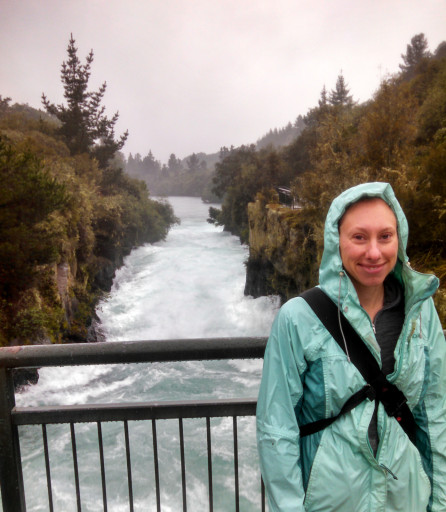 We saw that there is a botanical garden in Auckland so we decided to take the opportunity to visit it in winter and see what looks pretty in winter in the area. I think the answer to that question is that most plants are alive and kicking even in the heart of winter due to the lack of frost. We arrived about one month too late for roses so we caught the tail end of them; we were right in the middle of camellia flowering season, and we were about one or two weeks in front of magnolias which were just starting to bloom. We were very happy with the garden; they were extensive and pretty and there was a clear effort at outreach and labeling everything. There are even classes all year round with various plant sales.

The bottom line is that we will be coming back in spring to see how it changes when all of the blossoms and blooms are out.

In addition, because we like to add as much extra hiking in as we can, we went to the adjoining Totara Park for some scenic views. Having been to the top of most of the peaks in Auckland by now, I think that the Totara was my favorite view – you could see the city but it was also very green and blue from the surrounding sea and land.

It is hard to capture how nice and serene the garden was, even with a couple hundred other people. 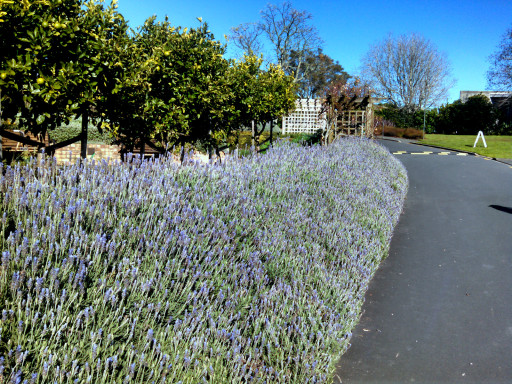 Lavender – in abundance. There was a wide range of plants from natives to edibles to even some cacti which is frankly impressive to grow in Auckland given the amount of rain. 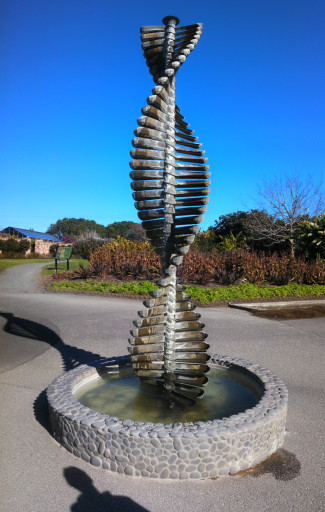 A pretty cool fountain. Makes me want to build some sculptural fountains myself. 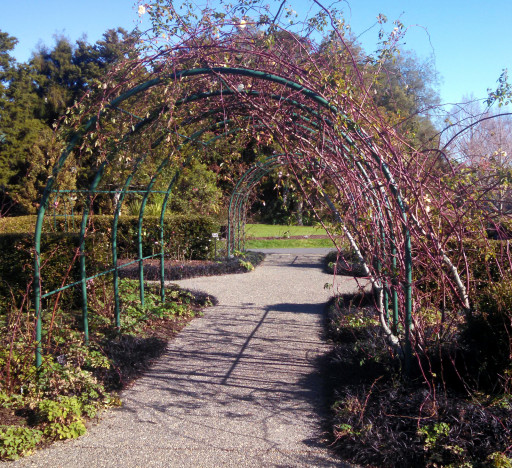 They had some trellised roses that I wish I got to see a couple of months ago. Have to wait till next year now. 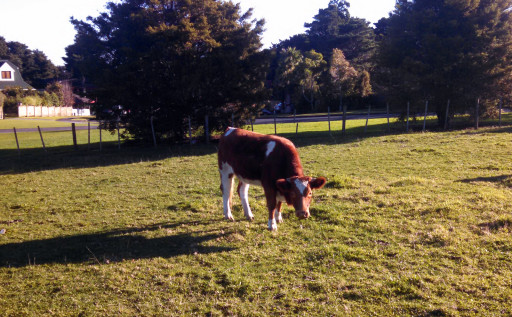 Obligatory grazing animal in Totara Park. NZ loves their combined park / grazing area. PS they are almost always dog off-lead areas which implies a fair bit of faith in the training of your dog. 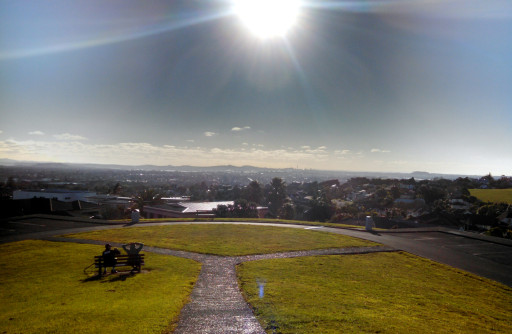 The view north from Totara Park. You can just see Auckland’s CBD in the distance.

We decided to spend Sunday on one of our walking spectaculars and I think that we over did ourselves this time. We walked south from our house until we got to Manukau Harbor and then headed west and south along the coast line through a couple of parks including Ambury Park and Puketutu Island.

It was an extremely beautiful hike, even if we got rained on and there where 40 kph winds for a fair bit of the hike. Nothing quite like a blustery day to make you enjoy a hike out in nature – and out in nature is where we were. I am still constantly amazed about how you can leave your house in a major city and go for a 9 hour, 45 km hike with more than half of it in parks and by the coast. I think I could get used to this.. 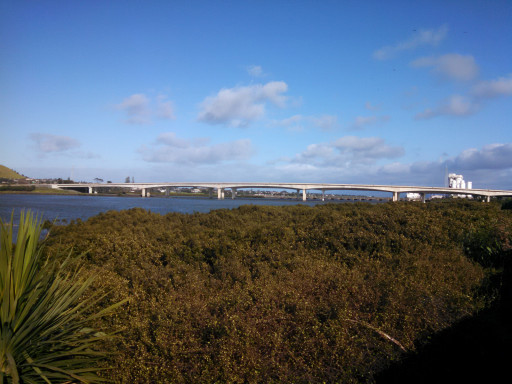 The bridge back home to Auckland looking east.

Yes, it really was that pretty. 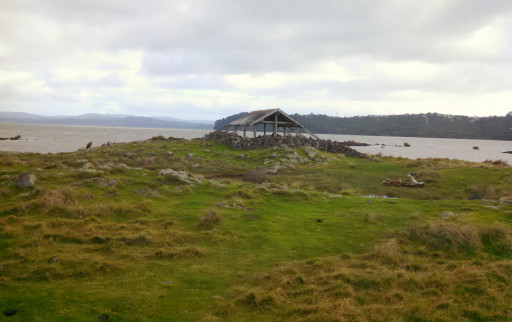 A bit of a lean-to by the beach. I would live here, but maybe I would splurge and put up some walls first. 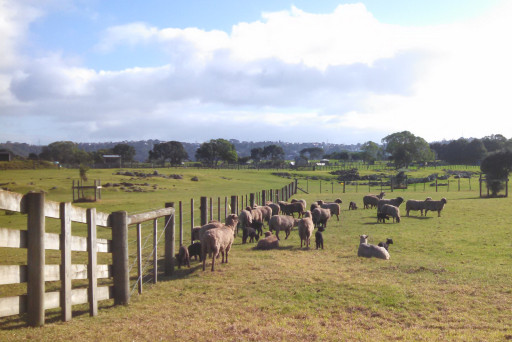 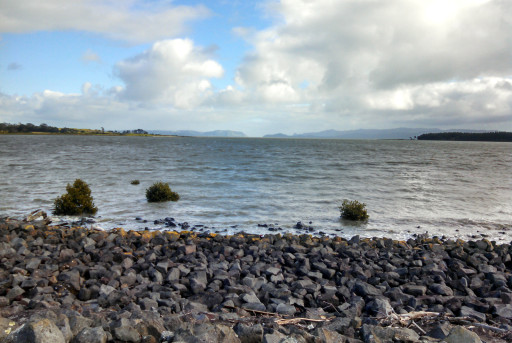 And what in my head is the Grey Havens. Past the second straight in the background is the Tasman Sea.