In the second of two parts of Jasmine’s and my revisit of our local parks in Santa Clara, we went to Alviso Slough. It is another park on the south of the San Francisco Bay, right on the water. This park was also a salt pond back in the day and it still has a number of very odd coloured ponds. Apparently, different microbes live in the different salinity ponds and they are all different colours.

This park has the advantage of being a short bike ride away, only about a 6 mile trip each way. And then we get to take the 9 mile circuit around the ponds and wetland. I was very disappointed in my last visit to Alviso as they were doing a fair bit of construction to the paths, which always destroys the feel of the park. But the park is all put back together and quite worth the pleasant, and very flat, walk. 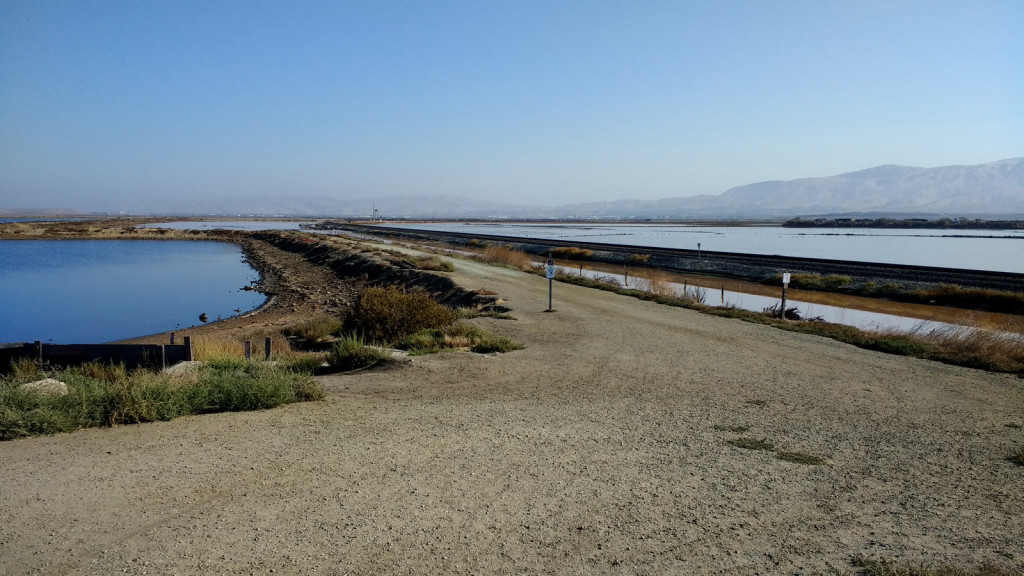 The hike has a variety of flat water views. This one is somewhat railroady. 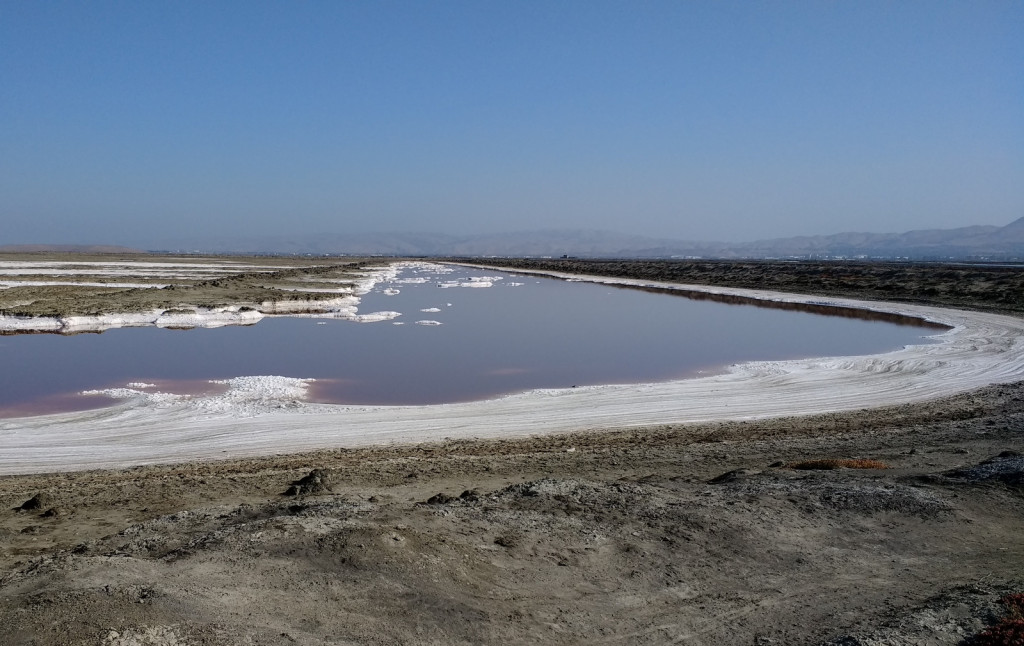 The icebergs are actually salt deposits. This whole area was pretty and surreal. 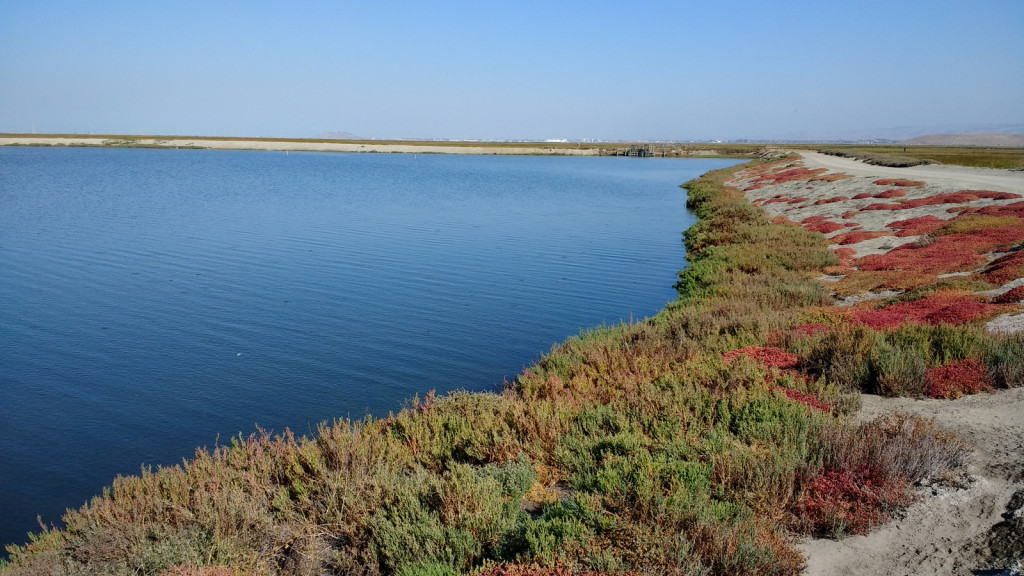 And this is what the average path looked like in the park. As you can imagine, hiking this is not recommended on hot days as the lack of trees can be a killer.

There is something about mountains reflecting in water that is majestic.

After a couple of days hanging out in San Francisco, Jasmine and I jetted down to the South Bay to be closer to Jasmine’s university. And we decided what we really needed to do was to visit some of our old hiking haunts, especially as we had the use of a friend’s car for the weekend. We decided that on a cooler late summer morning we would head over to Coyote Hills Park and hike around the hills / salt pools. It is a really nice park with easy to hike trails and seemed to fit the bill best for a relaxing day. Well, as relaxing as 15 miles of hiking ever is.

Also I got to play around with my new phone’s camera capabilities so all of these pictures are off of my new Moto G 4th gen. I’m reasonably happy with the camera; it takes good landscapes, but I don’t think the HDR is as good as my old phone and, like all cell phone cameras, it is really bad in low light. But, in any case, enjoy the photos. 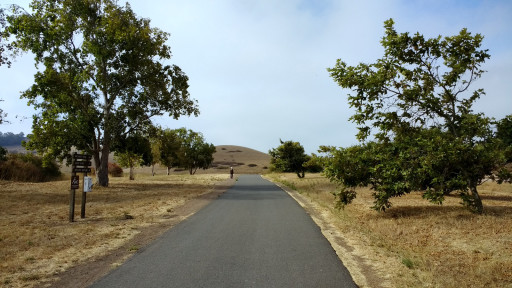 I think that brown hills can be pretty from a certain point of view. 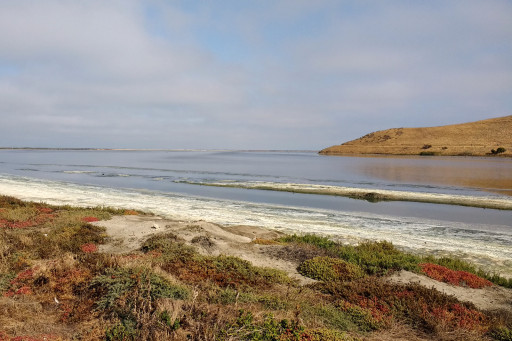 I think the Red/Green/Blue/Tan salt ponds let you see how blase the cameras dynamic range is. 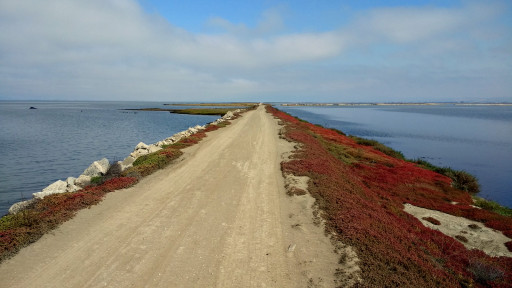 But it is hard to beat the point and click landscapes. 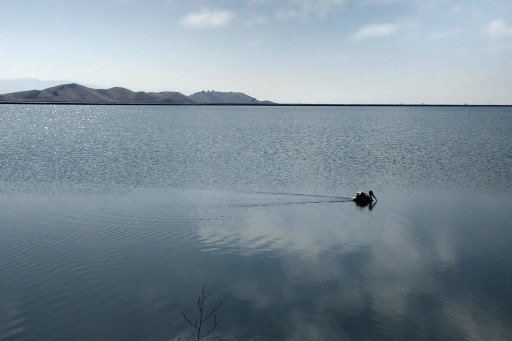 I love the water. And massive pelicans. 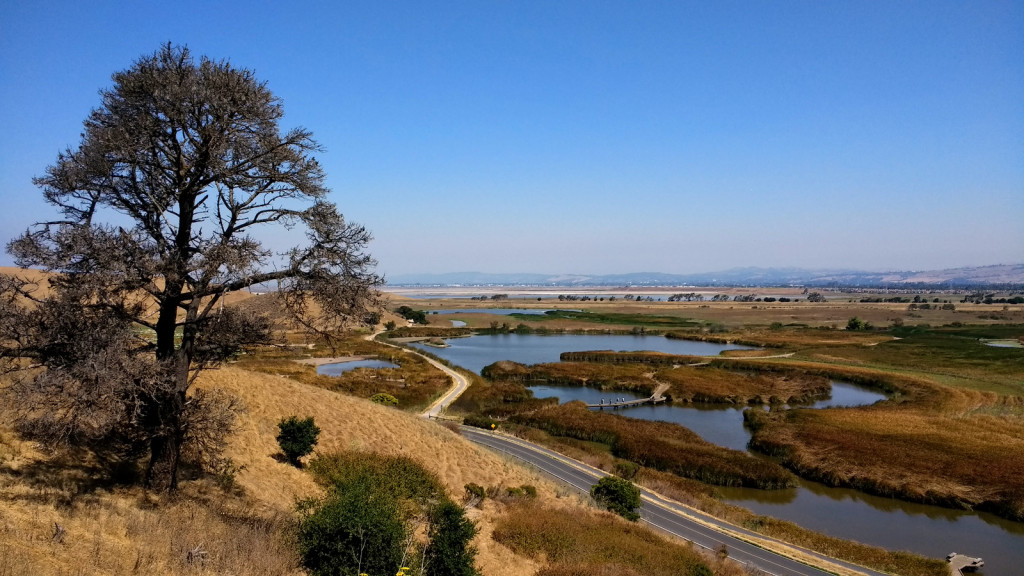 I think the new camera phone will work out nicely.

So after all of our adventures we had to head home! Jasmine and I were pretty excited about that, and we were also excited to start up our life in the US again. So we are now moving up to Seattle where I am working for Blue Origin and Jasmine is looking for a job in the robotics field and doing temporary work at her old university. And now only a half dozen blog posts to get us caught back up!

I think we will have fun in Seattle too. 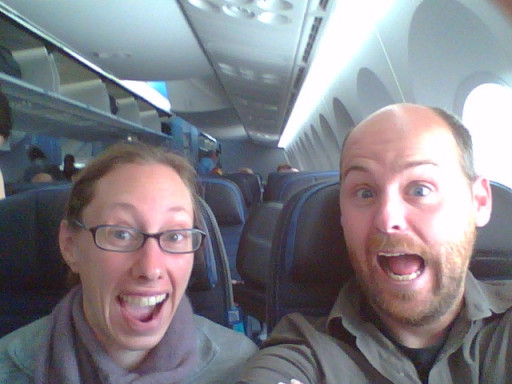 I was so exited to be on a transpacific flight I forgot I am a decade too old for selfies. 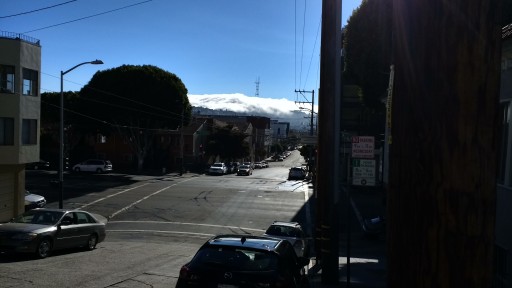 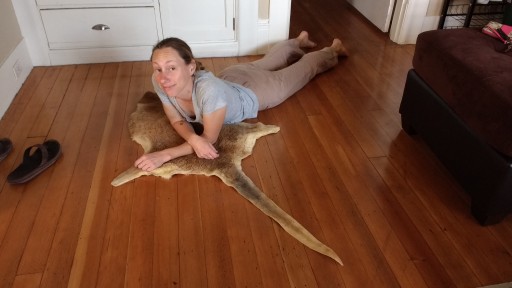 Jasmine is modeling the best gift I ever bought anyone – a red kangaroo skin! I think it went well with our friends’ desert southwest theme. His girlfriend disagreed. She won.

While in Sydney, we did a fair bit of traveling on the ferries, and the two longest two trips that we took were out to Manly (the town) and the Sydney Olympic Park.

On the way to the Olympic Park, we got to see a fair bit of the nicer suburbs of Sydney as well as some cool parks off of the river. The Olympic Park itself was interesting, as I had never seen one before, and was massive beyond what I anticipated. But, sadly, we forgot to bring swim suits and thus couldn’t go swimming in the old Olympic pool, which would have been cool. But the best part of this ferry trip was the parks and nature walks around the area. We got to see a fair amount of native bush, as good as you will get in a city, and also a couple of shipwrecks on the river. And, most puzzling of all, were a number of hills with spiral walkways up the top. I presume they are Aboriginal architecture of some sort, but I couldn’t find any information. I thought they were interesting.

Manly was the most stereotypical beach town that I could imagine and was still somehow interesting and worth going to. We hung out on the beach for a while, got some coffee and breakfast (Sardines on toast!), and lazed about. Then we walked back to the zoo via the Manly Scenic Walkway for another ferry home. I highly recommend the Manly ferry ride and walkway to anyone in Sydney with an extra day to spend. It gets you out of the city for a bit,  lets you check out a beach and some bush, and walks past some pretty cool restaurants. Plus, we saw a massive pod of dolphins in the harbor while walking around. 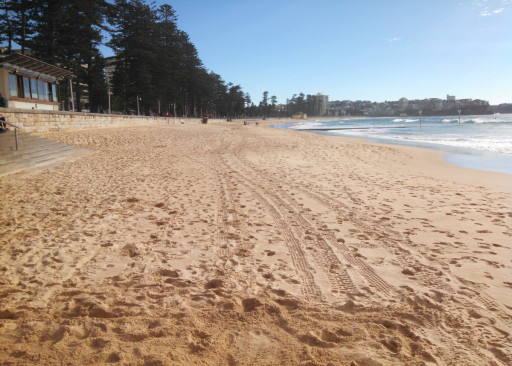 The Manly beach. It is both pretty and the exemplar of a beach town’s beach. 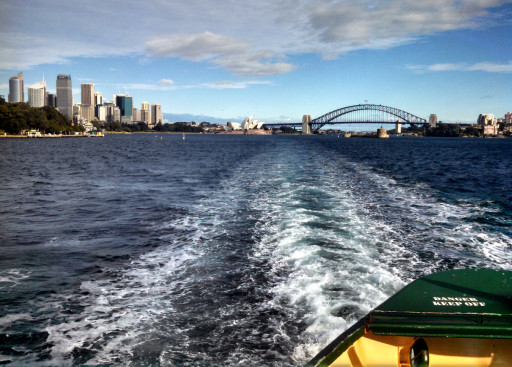 No complaints about the views from the ferry. 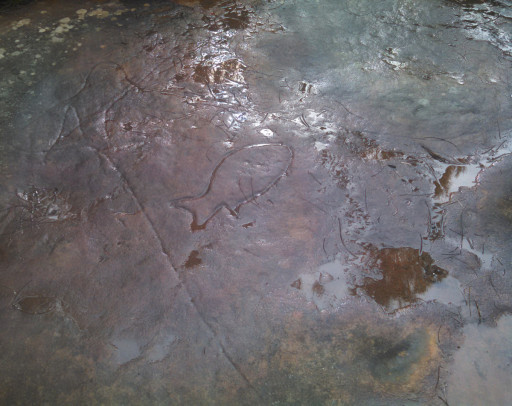 The Manly scenic walk has some aboriginal rock carvings on a spur trail. Fish and kangaroos were abundant. 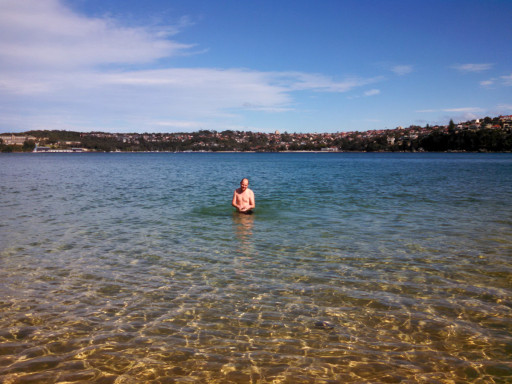 I feel the water is always warm enough to swim in. And this was too pretty to deny. 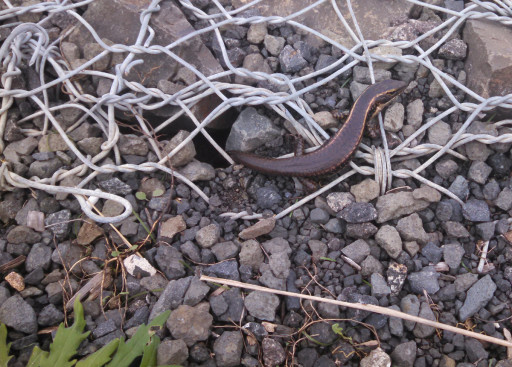 This is a skink. I am amused by the word skink and I don’t think I will ever get to type skink again in my life. 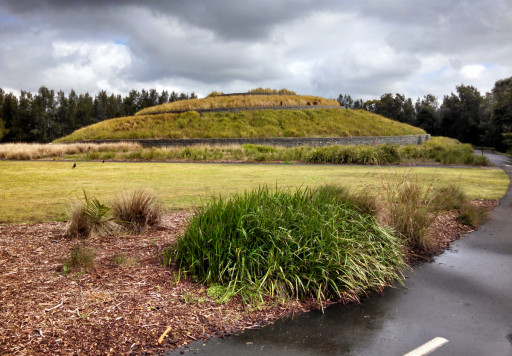 One of the aforementioned spiral hills. I wish I could figure out why.