One of the foods that I have seen occasionally at restaurants, but never cooked, is rabbit and one day I saw that my local butcher carried it so I had to give it a try. Our Czech neighbor gave me some advice as this is a dish they had cooked before a fair bit in the Czech Republic so here goes my first attempt at rabbit.

Take the 2 lb rabbit and stuff the innards with spices; I used sage, black pepper, and Chinese five spice.  Then wrap the outside with bacon, and cover with aluminum foil.  Preheat the oven to 400F and cook for one and a half hours. Remove the foil and brown for an extra half an hour.  It is really quite a lot like cooking any other poultry, you just add the skin.

Overall, it was pretty tasty, something like a mix between turkey and pork.  I don’t know that I would cook it again as it more expensive than most poultry and not really any better in taste, but a fun experience nevertheless. 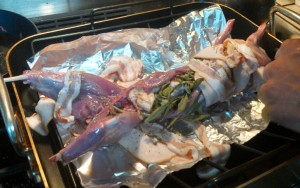 It takes a little time to wrap the rabbit with bacon, but it is pretty tasty in the end. 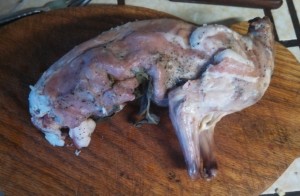 The rabbit with the hind legs off. That is where most of the meat is and everything else takes a good deal of butchering. 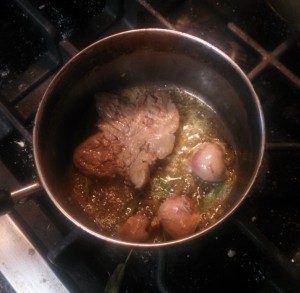 The liver of rabbit is extra large size and quite tasty so you should certainly make some pate as well. 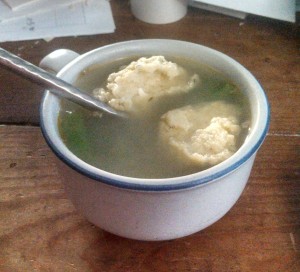 And I ended up having a fair bit of meat left on the bones so I made a soup out of the residuals. I think soup might actually be the best plan for rabbit. Maybe next time.